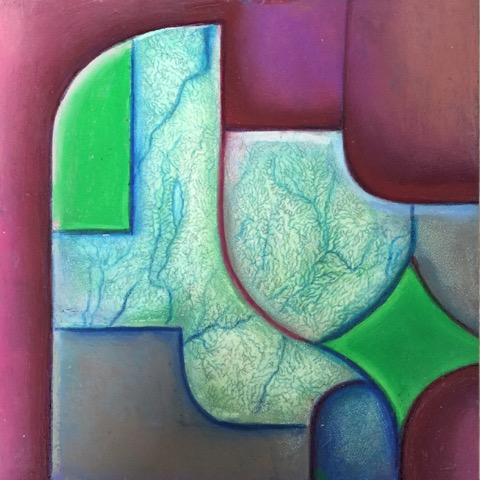 The rivers are from a new atlas. They are so beautiful and look so much like our circulatory systems, underlining that we all come from water. The geometric forms are taken from a 10th- century chateau where I lived while in residency at the La Napoule Art Foundation. The contrast between organic fragility and a massive fortress fascinated me, especially since it was so soon after the Colorado floods.

Susan Cooper is originally from California and has lived in Colorado for many years. She received her MA and BA degrees from the University of California at Berkeley and has been a professional artist ever since. Most of Susan’s current work is for public art. She has completed approximately thirty site-specific public projects in California, Florida, Colorado, Missouri, Alaska, and Nebraska. One early, major work are two high-relief murals in Denver’s City and County Building Rotunda. Among her many significant projects was the design for 20 miles of the Regional Transportation District (RTD) of the Metropolitan Denver Light Rail system for thirteen stations; a mixed-media mural for the Los Angeles Museum of the Holocaust; a concrete and granite shelter for the University of Nebraska; and a light sculpture for the Ritz Theatre in Jacksonville, Florida.

Her work is in the collections of several museums, corporations, and private and public collections. She continues to be a studio artist and her work has been exhibited in Colorado, New Mexico, Barcelona, Mexico City, California, Washington D.C., and New York.